Webinar: Women Changing the World, in the Past and Today 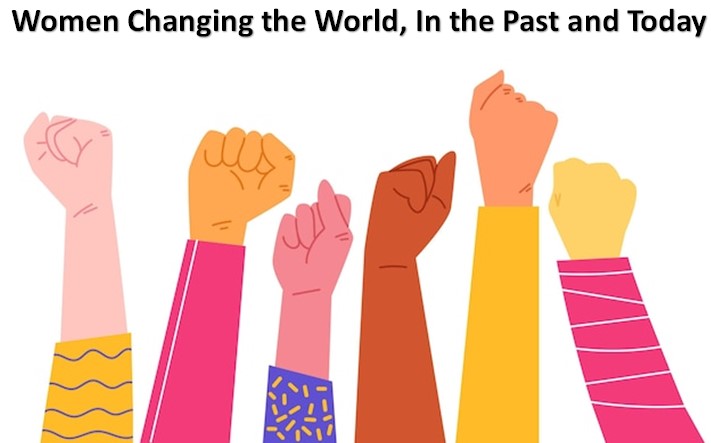 A discussion hosted by the International Action Hub of the National Council of Women of New Zealand and sponsored by the Pacific Women’s Watch NZ was held via the NCWNZ Zoom on Sunday, December 4th at 2 p.m. New Zealand Time. The panel of four women from around the world examined current and past roles of women's organisations in collaborative efforts at an international level to create lasting social change. The event was chaired by Carol Beaumont, NCWNZ Board member, and the live webinar included sign language interpreters.

You can view the webinar on the NCWNZ YouTube channel here: https://youtu.be/OeYLlAt7tU4

The following provides some background on the organisations represented in the panel:

The Women's International League for Peace and Freedom (WILPF) is a non-profit non-governmental organization working "to bring together women of different political views and philosophical and religious backgrounds determined to study and make known the causes of war and work for a permanent peace" and to unite women worldwide who oppose oppression and exploitation. WILPF has national sections in nearly fifty countries. WILPF is the oldest women's peace group in the world; headquartered in Geneva, WILPF holds observer status with the United Nations. WILPF developed out of the International Women's Congress against World War I that took place in The Hague, Netherlands, in 1915 and the formation of the International Women's Committee of Permanent Peace (the name WILPF was not chosen until 1919). New Zealanders were present at its founding which involved many European and U.S. women - Jane Addams, an American activist and the second woman to receive the Nobel Peace Prize, was elected the first president.

The International Trade Union Confederation-Asia Pacific (ITUC-AP) consists of 59 trade unions from 34 countries and territories in Asia and the Pacific region. The Confederation was founded on 4 September 2007 in Bangalore, India, originating from the merger of the International Confederation of Free Trade Unions - Asia Pacific Regional Organisation and the Brotherhood of Asian Trade Unions. There are approximately 60 million members. ITUC-Asia Pacific’s Constitution expressly guarantees the full integration of women in trade unions and the promotion of full gender parity in leadership bodies and activities at all levels. The ITUC-Asia Pacific and its affiliates commit to advancing gender equality and women’s empowerment through the Platform of Action for Gender Equality (PAGE), renewed every four years. The ITUC-Asia Pacific Women’s Committee is chaired by Yoshiko Norimatsu, and Paola Simonetti is Director of the Equality Department at the ITUC.They provide leadership on how affiliates should build workers’ power with gender equality and inclusion at the core of trade union actions. Anna Tuvera, Director of ITUC-AP’s Gender Equality Activities, presented in May 2022 a high-level review of the proposed activities slated for this year, including the "WaY2GO 2.0," a joint project with the DGB Bildungswerk Bund (BW) to advance the engagement of women and young trade unionists in leadership representations and social dialogues. Another goal this year for the Women's Committee is to broaden support for the International Labour Organization Convention 190 (C190), the first international treaty focused on eliminating violence and harassment in the workplace.

The Iranian Women in New Zealand (IWIN) Charitable Trust started in November 2020. Their mission is to promote women’s empowerment and social empathy. The group works on “advocating gender equality, encouraging community support, promoting solidarity and collaboration among Iranian women and their families, and through our core values that are respecting religious and cultural diversity, accepting differences of opinion, respecting moral and humanitarian values as well as collaborating with other organizations working for women, and promoting charitable work and volunteering.” They have offered several different events for the public in Auckland, such as art shows and commemorative events. They also offered a workshop for Farsi speakers on building a safer community by responding to people with empathy and dignity. A recent event hosted by IWIN was a panel discussion on women's activism against discrimination, violence, misogyny and patriarchy in Iran, Afghanistan, and New Zealand.