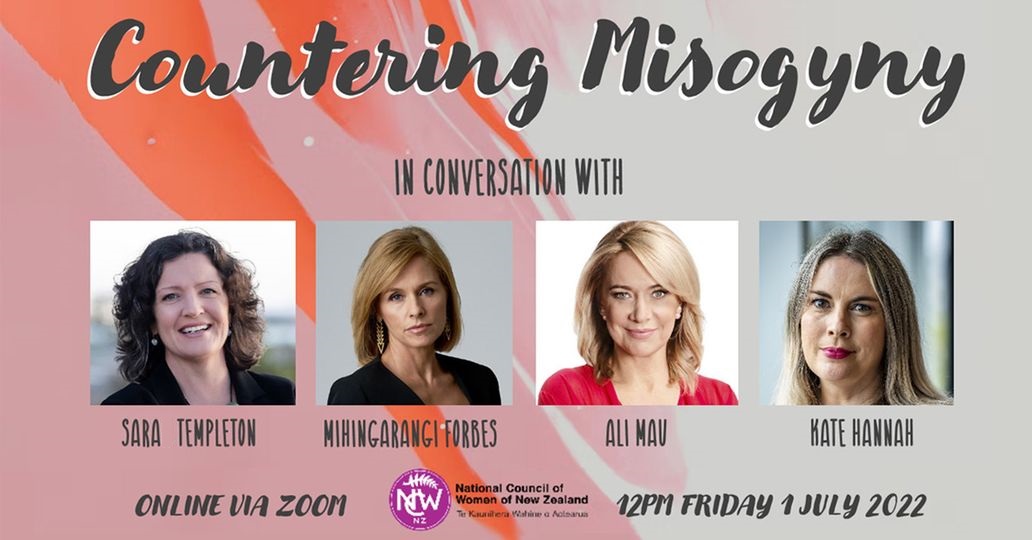 This piece was crafted by NCWNZ member Anne McCarthy after having attended the event. With over 250 participants, the topic and expert panelists attracted much attention. More information is coming about how the NCWNZ can follow up on the issues raised by the panelists and the Decision-Making and Influence Action Hub.

A webinar entitled ‘Countering Misogyny,’ facilitated by Sue Kedgley and the NCW Decision-Making and Influence Action Hub, took place on the 1st of July 2022. It consisted of a panel discussion amongst four leading New Zealand women’s rights advocates, journalists Mihingarangi Forbes and Alison Mau, Christchurch city councillor Sara Templeton, and researcher Kate Hannah. Its intent was to call out misogynistic online abuse to trigger a national conversation focusing on increased social and legislative safeguards in the future.

Early questioning by the webinar host, Sue Kedgley, opened up stories from the panelists about how they had been personally affected by online abuse, which then led to more holistic analysis. Discussion covered the online attacks on Kate Hannah as she monitored national abuse escalation in her Disinformation Project, Sara Templeton’s successful court case targeting her abuser, and the effects of abuse on career opportunities for female councillors and journalists. Alison Mau noted how abuse came in waves, either in weekly responses to her Sunday Times articles, or in a wider backlash to "Me Too" achievements. Mihingarangi Forbes highlighted how recently, anti-covid and far right rhetoric incrementally boosted racism and misogyny that was already embedded in imperialist and colonial attitudes within New Zealand.

The second half of the webinar focused on how to counter online abuse. Emphasis was placed on the need for women to consistently speak out against misogyny, for women in specific careers to form their own networks like the union of women journalists, as well as for effective institutional and company support for women employees. Sara identified that reporting emails, screen shots and evidence to Netsafe, New Zealand’s independent company set up to deter online harassment, was long-winded and unsupportive. Further, anonymous abusers online are protected by the tardy responses from international technology platforms. Kate reported that police are cautious to follow up situations where the legal frameworks are fragile; focused operational training was required. She also suggested that advocacy groups be developed to support people making claims to Facebook and the courts. Overall, panellists called for the Harmful Digital Communications Act and Netsafe to be reviewed for greater structural cohesion and impact.

In closing, Sue Kedgley congratulated the panelists for their courage and willingness to share their experiences and knowledge. The webinar was recorded and the plan is that it will be uploaded to YouTube for all to see (details on this to come later). Sue offered the audience an opportunity to offer their services to the NCWNZ as we take action on this topic by emailing to [email protected].

To read more articles from The Circular (issue 635) click on the tag below.