posted by Nina Santos | 45sc
April 06, 2022
It is with great sadness that we honour and acknowledge the passing of our Dame Miriam Dell ONZ DBE JP. Dame Miriam was at the forefront of women’s issues in New Zealand and internationally for more than three decades. She was a fierce champion for women's advancement and gender equality, and has been a life member of NCWNZ since 1982. 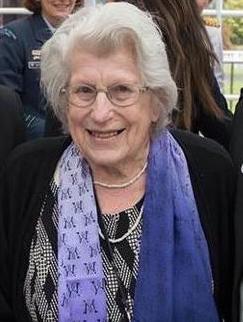 Among her many roles and accolades, Dame Miriam will also be remembered as a Founding Member and Past President of the Hutt Valley Branch of the NCW and a Member of the national body. Her natural flair for leadership saw her elected National President of the National Council of Women from 1970 to 1974, where she led many initiatives such as being the NZ coordinator of the UN International Women's Year in 1975, and Chair of the Suffrage Centennial Year Trust in 1993. She was also elected as President of the International Council of Women, the first New Zealander to achieve this distinction.

Dame Miriam Dell was the New Zealand Government Delegate to all three UN Conferences for the Decade for Women in the 1970s. She was also the first Chairperson of the Committee on Women – what is now Manatū Wāhine, Ministry for Women, New Zealand.

We are deeply saddened by this news, but we know that Dame Miriam's legacy lives on. Thank you Dame Miriam for your service and contributions to women in Aotearoa.