Charts to Use: Child Poverty in New Zealand

The Ministry of Social Development (MSD) Child Poverty Report 2022, prepared by Bryan Perry, claims that data stretching from 2007 to 2021 show that New Zealand has seen a drop in the number of children in poverty. Poverty is defined essentially as indication of household resources being insufficient to meet basic material needs. The trend (see the charts below) has been falling for those households with children (i.e., ages 0-17) reporting “not enough” income for basics. This trend for New Zealand has been ignored by many who use a limited amount of data (e.g., just household income) or who insist that if only people got full-time work, their material hardship would lessen.  Instead, MSD’s main Household Incomes and Material Wellbeing reports show that not all households with low incomes are in hardship, and not all who report they live in hardship have low incomes.

The chart below illustrates material hardship trends for children in low-income households, noted here as “poor children,” as well as for children in “non-poor” and “near-poor” households from 2007 to 2021. (NOTE: AHC equates to a household’s total income after deducting housing costs; and HES stands for Household Economic Survey.) 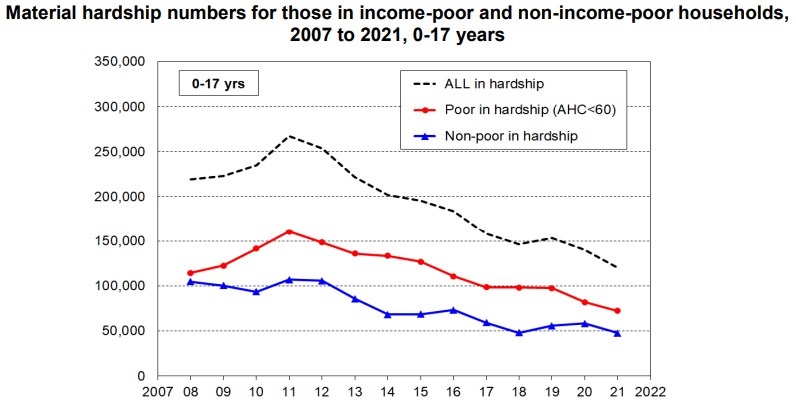 The chart shows that material hardship rates for children increased during the Global Financial Crisis of 2007-2008 (GFC) illustrating the associated downturn, then the trend in steady improvement from 2013 to 2021. This downward trend could relate to a combination of rising employment rates, rising wages, increases to income support for families with children, increased support for housing and child-care costs, and other measures that reduce demand on the family budget (e.g., free doctors’ visits and food-in-schools programmes).

This next chart shows median AHC household income for New Zealand children by ethnicity in real (CPI-adjusted) terms. (NOTE: the Consumers Price Index (CPI) is a measure of inflation for New Zealand households.) There have been solid net gains in real terms since 2007 for children in each of the main ethnic groups, albeit with different trajectories through and immediately after the GFC (around a 35% real gain) for all four groups since 2007. Since disability statistics are available from the HES only in 2019-20 and 2020-21, there is no trend information.

This chart shows that median incomes of households with children of predominantly Māori and Pacific peoples still lag below those households in New Zealand who identify themselves as European. However, the rise in median incomes for households with children of Māori and Pacific peoples is steeper since 2018 and perhaps could continue to rise. However, the report finds many problems still needing to be addressed. For example, the surveys show that around 8% of all children (90,000) live in homes that report a major problem with dampness or mould. Also, the report shows that for many households, full-time paid employment on its own does not provide enough for the household even at a very basic level, especially where there are children. Even with the WFF tax credits (including the in-work tax credit) and other support (e.g. childcare subsidies), some working households with children still struggle. Around half the children in households in material hardship come from households whose main source of income is from paid labour. And, of course, the value of unpaid work is immense, especially in relation to parenting and other caring responsibilities, but is not examined in this report.

Perry’s report (download the .pdf file at https://www.msd.govt.nz/documents/about-msd-and-our-work/publications-resources/research/child-poverty-in-nz/2022-child-poverty-report.pdf) uses statistics that come from multiple sources. It uses measures for the Child Poverty Reduction Act (2018), Stats NZ's Child Poverty Statistics report (February 2022), and the 2020-21 Household Economic Survey (finished on June 30, 2022). Perry reminds his readers that the Household Economic Survey (HES) responses come from the “usually resident” population living in private dwellings. This means the survey results do not include those children living in places such as motels, boarding houses and hostels or those in more transient accommodation -- those “living rough.” For example, the HES does not include the families in Emergency Housing which includes around 3,800 children (Source: MSD Monthly Housing Update for July 2022).

Ultimately, Perry reports a falling trend for households with children reporting “not enough” income for basics. While he cautions the results of the COVID-19 pandemic are still being processed and that the surveys are missing data on children living in transient housing, he concludes children of New Zealand have overall since 2007 experienced improvements in material wellbeing.