Every two years the National Council of Women partners with Research NZ to undertake a comprehensive survey of gender attitudes in Aotearoa New Zealand. Across the three surveys so far (2017, 2019 and 2021), up to 42% of the respondents indicated they believed that gender equality has for the most part been achieved in New Zealand. This grand statement deserves more scrutiny. For example, the male respondents tended to show they were more optimistic about this than the female respondents. What would one expect to see and/or experience if gender equality had been achieved? It's worth revisiting some of the results of the Gender Attitudes Survey 2021.

On page 41 of the 2021 Gender Attitudes report, you will find Table 15. This chart examines the results by gender of the survey respondents regarding their agreement of particular outcomes from "achieving gender equality." The survey asked respondents to imagine what it would mean to New Zealand if gender equality had been achieved, and they then rated each statement presented. In this scenario, more than 50% respondents agreed with every statement, and the highest rating in agreement with 75% of those answering the question (rating with a 4 or 5 out of 5) came with the statement regarding equal pay. The next two statements with high percentage of agreement was that achieving gender equality would mean that New Zealand would see more equal sharing of childcare responsibilities and that women would have improved job/career opportunities (both at 68% respondent agreement). However, here again the gender of the respondents makes a big difference. Take a look. 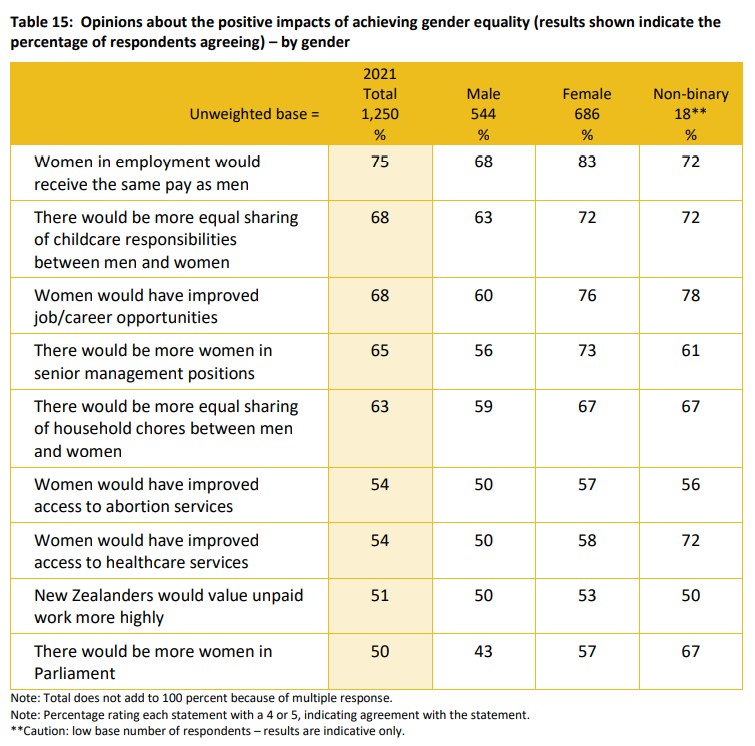 Overall, female and non-binary respondents recorded higher levels of agreement than male respondents in relation to each statement. See for example, 83% female respondents agreed that, if gender equality had been agreed in New Zealand, women in employment would receive the same pay as men (compared with 68% for male respondents).

However, scrutinizing the answers to this set of statements to see groupings by ethnicity offers more complexity. We cannot assume that women experience the world all the same way. The researchers reported on page 43 that Māori and Pasifika tended to have less affinity than Pākehā with the specific statements overall. When imagining how gender equality might demonstrate that women were equal to men in New Zealand, the issue of equal pay for example was less an indicator of gender equality for those respondents who identified as Māori, Pasifika, and Asian. 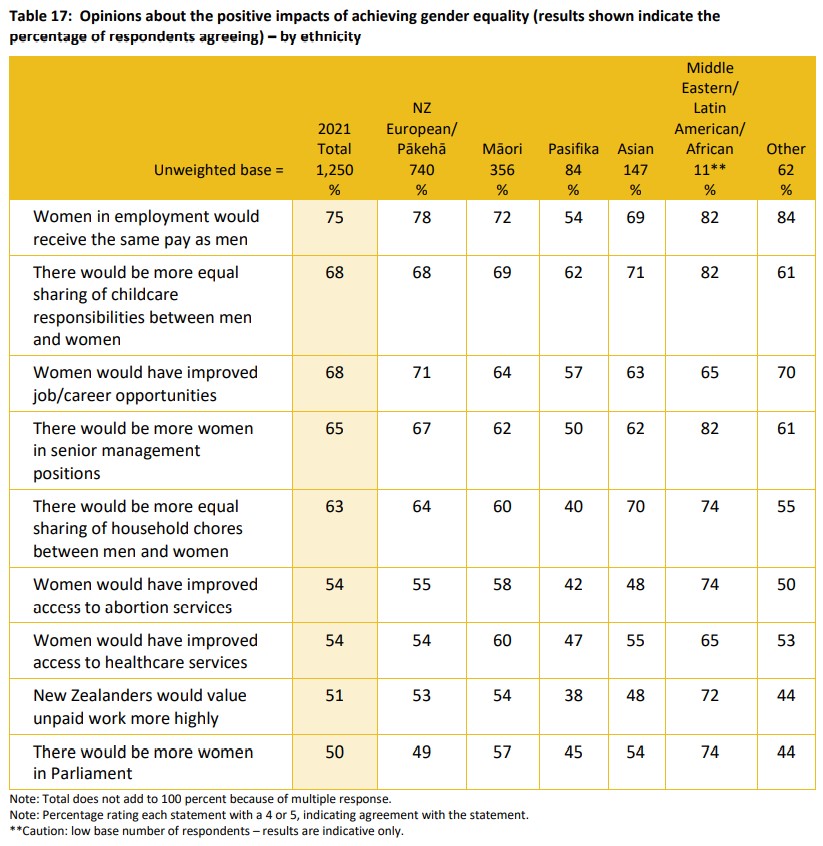 For Māori, "equal sharing of childcare responsibilities between men and women" seemed more likely an expression of gender equality. In addition, Māori tended to see having improved access to healthcare (and abortion services), valuing unpaid work, and more elected officials in Parliament as evidence of gender equality. All the other prescribed statements skewed toward a NZ European/Pākehā perspective.

These two charts together deserve discussion and understanding how the work of women's activism may be expressed in different ways in order to be inclusive. A more nuanced understanding of what we might mean by women, their experiences and world views -- one that takes into account not only gender but also ethnicity -- is warranted.

To read more articles from The Circular (issue 636), click on the tag below.