1837: William Yate, a Church Missionary Society worker who lived peaceably with his male companion for two years in the Māori village of Waimate, was removed from his duties upon evidence of his homosexual activities with an English sailor as well as several male Māori youths at the Bay of Islands.

1858: English Laws Act enforces in New Zealand all English laws as of 14 January 1840, including the law that acts of sodomy are "unnatural."

1867: The English Parliament replaced the death penalty for buggery with a maximum sentence of life imprisonment in 1861. New Zealand enacted similar legislation six years later. Consent is no defence.

1893: Any sexual activity between men of any age became unlawful in England in 1885, and New Zealand followed suit in 1893. Typically, sentences of one or two years’ hard labour were imposed for offences other than sodomy. Men found guilty of sodomy could still be flogged, and serve their term of imprisonment with hard labour, in the 1940s and 1950s.

1921: Macquisten Amendment attempted to add "acts of gross indecncy by females" to 1885 Act. Defeated in the House of Lords.

Battle of the Camellias 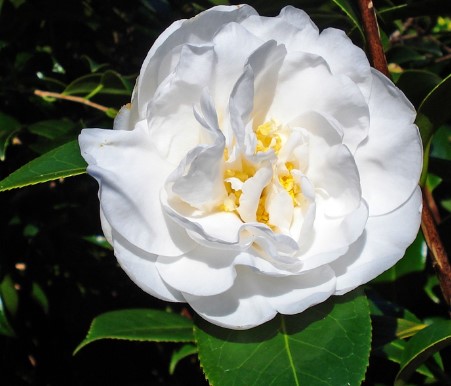 Camellias originate from China, Japan and Southeast Asia. They are one of the oldest flowers known to humans. They are hardy, evergreen and have many sizes and shapes suitable for many types of garden situations, from specimen trees to ground covers, containers or hedges. The species most widely grown as ornamentals are the sasanqua, japonica and reticulata. The first of these to flower every year in autumn and winter are the sasanquas. Japonica camellias are generally taller than sasanquas and have larger, more leathery leaves. Their flowers are larger too and they flower from winter to late spring and are generally slower growing. In New Zealand camellias bloom from late August to late September. The Camellia japonica alba plena 'Kate Sheppard' has become a symbol of New Zealand women’s suffrage since it was first introduced from Taranaki in 1993.

1888. Walter and Kate Sheppard built an eight-room kauri and slate-roofed villa on their two acres purchased in 1887. The address is 83 Clyde Road, and the village was built in a rural suburb of Christchurch called Fendalton. It was located on the same street as properties owned by Kate's brother Frank Malcolm and her sisters Isabel May and Marie Beath. Today, the suburb is now called Ilam, and the historic site borders the University of Canterbury.

1891. Kate began regularly reporting on the women's suffrage movement through the women's page in The Prohibitionist, published by the Sydenham Prohibition League. Since 1887 Kate had served as the national superintendent for the department of Franchise and Legislation for the Women's Christian Temperance Union of New Zealand – the first national organisation established by and run specifically by women. Together with her sister Isabel, she had been using her home as an office for their shared interests in women's rights activism.

1893. At her dining room table in this house, one of the women's suffrage petition rolls was pasted together before it was sent to the House of Representatives in Wellington. This particular roll contained almost 32,000 signatures. Here in the garden, Kate received a telegram on 19 September 1893 informing her of the reform of the Electoral Law in which women won the right to vote in general elections.

1875. NZ Parliament made compulsory in all provinces for women ratepayers to be allowed to vote in municipal elections.

1893. NZ women at least 21 years of age – property ownership not required for suffrage since 1879 - vote in the national general election (28 November – and on 20 December 1893, women vote in Māori seats for first time).